PR Agency Owners to be Offered Book Free of Charge

New York, NY. November, 2015 – “When and How – Selling Your Public Relations Firm” by Art Stevens is now available. Mr. Stevens is managing partner of The Stevens Group and formerly the founder and CEO of LobsenzStevens, a top twenty independent public relations firm. 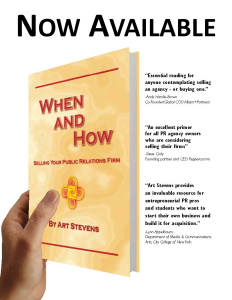 The book consists of blogs Stevens has written for the past several years for PRSA’s online publication, Tactics. The book covers every facet of selling a PR agency from the moment an agency is created until the day the owner considers future options.

According to Stevens the book will be given free of charge to any U.S. pr agency owner who requests it.

“As a former PR agency founder and owner myself, I understand the mindset of agency owners. I have personally lived and breathed every issue that comes up in the running of a PR agency business,” Stevens said.

“Plus I acquired four firms during my tenure as CEO of LobsenzStevens and went through the experience of selling my firm as well.”

Stevens’ firm was acquired by Publicis in 2000 and he went on to manage the New York office. Since 2003 he has been facilitating mergers and acquisitions in addition to consulting with PR agency owners on running their businesses.

“A PR agency is a significant asset in the life of an agency owner and must be treated accordingly, ” Stevens said. “PR firms need more guidance in making one of the most important decisions in their business life — how to capitalize on the blood, sweat and tears agency owners put into starting a business and seeing it reach a certain level of success. I have personally facilitated the sale of PR firms with revenues from $300,000 a year up to $40 million. My job has been to make good matches. How this is done is the basis for this book.”

The book features such subjects as what you need to know about getting acquired, an agency owner’s self “sell” test, today’s acquisition landscape and why a buyer’s vision must align with a seller’s. The book is endorsed by such PR agency principals as Richard Edelman (Edelman), Peter Finn (Finn Partners), Jim Weiss (W2O Group), Florence Quinn (Quinn and Company), Andy Hardie-Brown (Allison and Partners), Harold Burson (Burson Marsteller) and Steve Cody (Peppercomm).

Weiss, who is the founder and CEO of W2O Group, currently the fourth largest independent PR agency in the country, said: “Art gave me my start as an intern, which put me on the path to starting and growing my own independent firm. His wisdom and insights are invaluable to any owner or leader looking to optimize their firm for maximum return — either in a sale or going and growing it alone.”

Richard Edelman said: “Art has long relationships built on trust with most senior executives in the PR agency world. His advice is always objective and valuable.”

The book will be available in a quality paperback version as well as through Amazon.